“The approval of such men, who do not even stand well in their own eyes, has no value for him.”

The approval of others is important; it allows us to know that within our relations, from close knit to wider communities; we are fitting in.

And despite what we sometimes wish to believe, we do not function well in isolation. It is not somewhere we’re supposed to be. When we do something that others disapprove of, a distinctly uncomfortable sensation comes over us; warning us of our misstep. We usually can’t alleviate it until we feel we have in some way, gained back their approval. This is useful, as we can re-evaluate and correct our behaviour, allowing us to continue on in harmony.

For some, however, the discomfort associated with experiencing disapproval is so great, that everyone’s approval is needed, in every instance.

It creates such a level of unease that every endeavour is taken to appease everyone. But of course, it is an impossible task. If we take any meaningful or purposeful action, there will be people who disapprove. This is because when we choose a decisive path, we are aligning ourselves with some, and separating ourselves from others. But this aligning and separating is necessary. Who do we want to be surrounded by? Whose approval do we want? Why would we act in accordance with the approval or disapproval of someone who has different ideas of what is meaningful, or someone who is greatly lacking in themselves?

Everyone has a jury; people who judge our behaviour and actions.

Instead of allowing everyone have influence over us, those people whose approval we seek should be carefully chosen on merit. By being selective of our jury, their approval and disapproval serve as a map which guides us in an upward motion. It provides us with barriers, creating a path of mean between behaviours which will gain worthy approval and constructive disapproval. The approval we seek, will influence our own behaviour, actions, and ultimately; our destination. 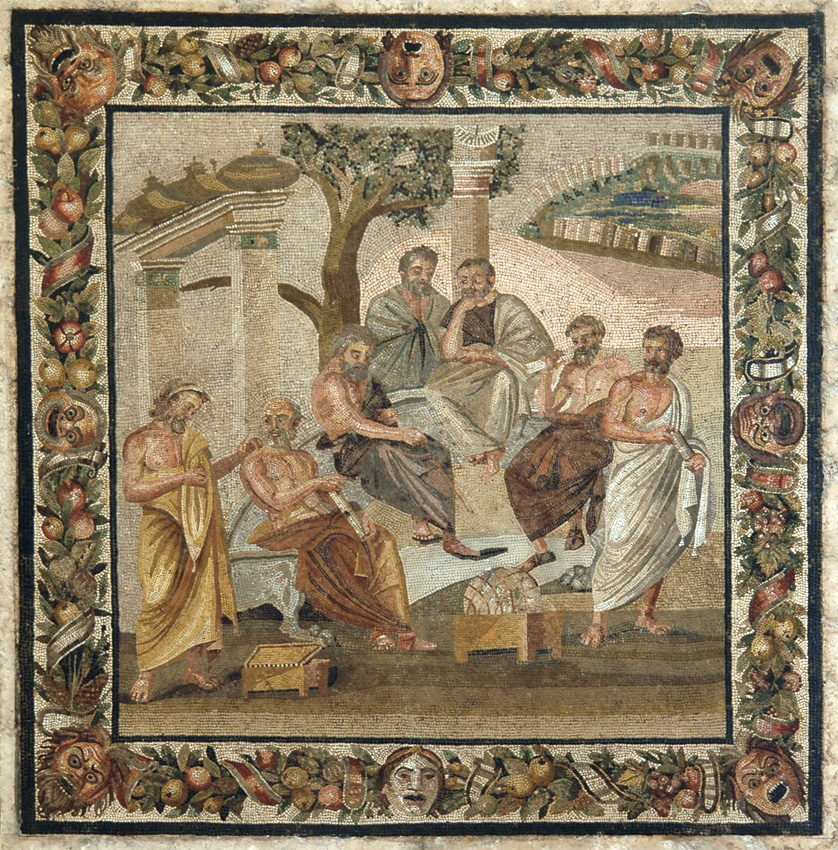 Photo: Sergey Sosnovskiy (CC BY-SA 4.0). Mosaic recovered from the Villa of T. Siminius Stephanus in Pompeii, preserved from the volcanic ash. Believed to be from the 1st century BC. Now located at Naples, National Archaeological Museum.

It is thought to depict a gathering of philosophers sharing ideas and learning from one another; more specifically, Plato’s Academy. In the background there is what seems to be, the Acropolis of Athens, leading us to believe it is indeed depicting the city of Athens. Plato is also said to have founded his Academy outside of the city walls of Athens.

‘The Academy was not a school or college in the modern sense but rather an informal association of people, who were interested in studying philosophy, mathematics, and theoretical astronomy with Plato as their guide. The Academy became so famous as a gathering place for intellectuals that it continued to operate for nine hundred years after Plato’s death, with periods in which it was directed by distinguished philosophers and others during which it lapsed into mediocrity’. (Thomas R. Martin, An Overview of Classical Greek History from Mycenae to Alexander,New Directions in Philosophy and Education, Plato’s Academy, TRM OV 15.2)